We and selected partners use cookies or similar technologies to ensure you get the best experience on the Teamtailor website. With respect to cookies that are not considered necessary (as specified in the Cookie Policy), we and our selected partners may use cookies for the following purposes: personalized website experience, develop and improve products and in some cases targeted advertisement that are based on your interests. You can manage or disable cookies by clicking on "Manage cookies" at the bottom of each website page.

When you visit this website, it may store or retrieve information on your browser, mostly in the form of cookies. This information might be about you, your preferences or your device and is mostly used to make the website work as you expect it to. The information does not usually directly identify you, but it can give you a more personalized web experience. Because we respect your right to privacy, you can choose not to allow some types of cookies. Below is a list of different categories of cookies that may be set and that you can freely change. However, blocking some types of cookies may impact your experience of the site and the services we are able to offer.

These cookies are required and must be accepted to use this site.

These cookies are used to deliver adverts more relevant to you and your interests. 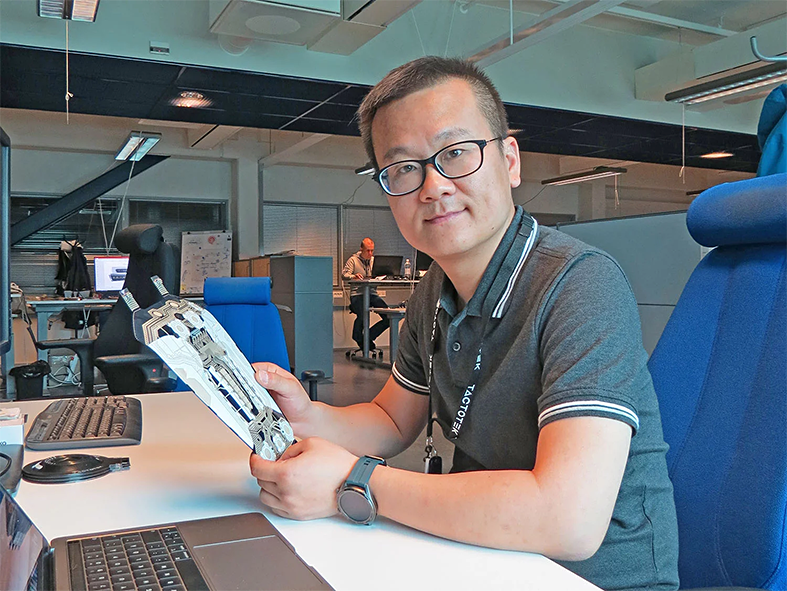 My journey towards technology development began when I started my studies in 1999 at Central South University of China. My degree concentrated in Solid-state physics but my main topic was nano-materials. When I graduated in December 2006, my original aim was to continue studying and attain a doctor's degree, but it turned out I was more interested in product development. I was fascinated at the thought that something I had been involved in from the start, would be in an actual store and people would buy it. I decided that the academic world was not for me and started to pursue other opportunities rather than completing a PhD.

My connection with Finland started in 2007, when I became a member of BYD’s Research & Development department that was in cooperation with Nokia. Our aim was to provide new technology, solutions and decorations for Nokia’s mobile phones. As time passed, I became a project manager for all R&D projects involving Nokia, along with Motorola, and our focus was in future’s new technology that demanded more efficient solutions. My Finnish connection grew even tighter when in 2011, I decided to join a Finnish company called LiteOn Mobile, earlier known as Perlos. My work title changed to Global Tooling Manager and in 2013 I became a Global Program Manager. The setup remained fairly similar, at LOM we provided mechanic solutions and products for Nokia and other big brands like Apple. I worked very closely with high skilled Finns in a variety of work areas and together we developed, as well as delivered, high quality parts at a rapid phase. Having demanding customers like Apple and Nokia drove me to learn more about manufacturing, progress to mass production and deepen my project management skills.

“Life is like a box of chocolates, you never know what you’re going to get.” is a very fitting quote for my story with TactoTek. It started in the summer of 2015, when my former boss Mr. Marko Suo-Anttila informed me that TactoTek is looking for a Chinese native to develop Chinese market for a new technology. I went online and checked out their website and an introduction to this unique technology. I started to smile while browsing and remembered my own experiments with similar technology when I was still at BYD around 2010. It was only early testing of the idea but I had seen the benefits of injection molded electronics along with many faults involving the molding process and issues with materials that were not suitable for the task. So, when I saw that TactoTek was proposing using silver inks rather than traditional copper ones, alongside with excellent ideas and new technologies, I was thrilled. I applied right away and soon I was notified that an interview process was arranged with Vice President of Sales and later with the CEO… I did not expect such high level personnel at that stage, but for me, it meant the company really wanted to know the person they are hiring and make conscious decisions.

After a year of working in China promoting IMSE technology to Chinese automotive companies, my boss Mr. Sami Hyyryläinen called me and wondered why don’t I come to Finland and work there. Well, in my mind I was thinking: “Why not move to another country where there are -30 degrees in the winter and minimal sunlight for the majority of the year… it doesn’t sound great, does it?” I had a long discussion with my family (including my 2,5 year-old daughter) over the next several weeks, and finally agreed that we should explore other cultures and a different lifestyle when such an opportunity presents itself. My daughter was excited for Finnish winter since she’s obsessed with ice and snow, apparently from seeing the movie “Frozen”. We ended up moving to Finland in the spring of 2017 and were so grateful for the support and great help from HR department and other TT colleagues in terms of relocating to a new country. These people helped us to move our furniture into a rented apartment and overall gave us a warm welcome. Now that we’ve settled into this beautiful country, we moved to our own apartment, have enjoyed the weather and love the culture. We found that the Finns and Chinese are not that different from each other, Finns are even more introverted and shy than Chinese people.

Working at TactoTek with high-talented people brings so much joy to me. Everybody is at the same wavelength and we all work toward the same goal and target, that is making IMSE the next big thing. We believe we are going to change the world of electronics, re-shape the way of thinking and we put our great efforts in order to make that happen.

Let’s recruit together and find your next colleague.